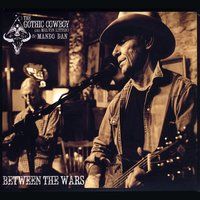 From the recording Between the Wars

While driving down a pavement road, it was a cold day in November
It started snowing, she told the story about the murder of Bobby Rose
Now in the Thirtiues the men would gamble, drink ‘n ramble around the county
To make the game many came with money from selling off their cattle
At an old house they’s playing poker , in walks a joker, he’s got a big gun
It’s a game of chance, ya lost your pants, I want every man here to hand ‘em over
He marched them down into the cellar and said, Now fellas, lay on the floor
He crossed the yard then drove a car against the door and he didn’t leave a dollar

Around the cafes and the depot some said, Bob Rose must be the gunman
He always came, that night he missed the game ‘n he’s the one could do it all alone
Bobby Rose ran the creamery, stood six feet, young ‘n handsome
He was well-liked, had a pretty wife, took her dancing down east in Kansas City
And Alice Rose was mighty pretty, and her daddy was the town marshal
Ol’ Bob was lucky, some say too lucky with the cards as well as with the ladies

Two months later around a dim light, the dealer cries, You’ve won again
That’s three outa five you’ve won tonight or dammit will you tell that I’m blind
The other man he just grinned and said, Now men ain’t it a shame
Ya take a chance, ya lose your pants, like taken eggs from a one-legged hen
The dealer growls, Now let’s remember…last September you were him
You just guessing, I ain’t confessing…but all their lips were set hard ‘n thin
They help him up against the wall so he wouldn’t fall as they beat him
They cracked his head, at the ears he bled, he went limp when someone broke his jaw

Come on get up, start acting sober, do as you’re told, come to your feet
Perhaps he dead, the little man said, He doesn’t breathe and I swear he getting colder
The room falls silent as a cave, behind the shade a lantern burns
Through the shadows moves a new ghost, they hear it mumbling all their names
We’ve done a murder, the dealer moans, you see the bone behind his ear
It’s a sad mistake, it ain’t too late, so listen here we’ve still got till early morn
The dealer says, I’ll take the body of poor Bobby, you boys drive his car
We’ll let the train come smash his brain ‘n by nthe stars we’ll swear we saw him drinking

They park the car right on the tracks, then looking back cry, Where’s our friend
The Rock Island Line come flying, they rush away just before they hear the crack
On down the road they find the dealer, his wheels are spinning above culvert
The roads are slick, I jumped the ditch, the car ain’t hurt but you all know how I’m feeling
They dump the body down a cistern then push the car back on the road
When they find that well, they’ll say he fell after roaming from the wreck upon the curve

Three day pass, it starts to snow, it’s on the radio and people wonder
It’s now Thanksgiving, still he’s missing then a hunter finds the body down that hole
The county gathers at the inquest, the death is ruled accidental
Without proof they can’t accuse, says the marshal, Now ya know I done my best
At Bobby’s grave stands his brother with his mother and his uncle
Pretty Alice cries as the service dies ‘n says, A shovel can’t cover up a murder
And there is talk accusing Alice, the women all jealous of her red hair
It breaks her heart, tears her apart, she pays the fare and takes a train to Dallas
But Bobby’s older brother name of Durard claims he’s heard by who the deed was done
There’s a debt, they’ll pay it yet, some are going to hell and that’s my word


Willy Stanton told his friends, I know it’s him there on my phone
When I answer I hear his laughter, he’s in my bones, I can feel him on my skin
They find Willy dead on New Year’s with the fear locked in his eyes
The way he died was suicide, he fired the pistol just above his ear
And ol’ Durard don’t say nothing, keeps staring with those gray eyes
He’s a bear-like man, got giant hands, never smiles when he sees ya coming

Carlin Hill farmed a quarter, he had a dollar in every game
One year later he got a letter, there was no name and it mentioned a murder
They found Carlin behind his house, there ain’t no doubt said the sheriff
He pressed the gun to his heart ‘n lung, he had big debts coming from the drought
And ol’ Durard don’t say nothing, keeps staring with those gray eyes
He’s a bear-like man, got giant hands, never smiles when he sees ya coming

One night they find poor Eddy Rollin, his motor running up in Nebraska
Eddy dies but his date survives, the whiskey his ma claimed was poisoned
And Henry Garth, ten years later, went to the river for the weekend
He’s never found, they thought he’d drowned
But he could swing in any current said a neighbor
And ol’ Durard don’t say nothing, keeps staring with those gray eyes
He’s a bear-like man, got giant hands, never smiles when he sees ya coming

It was down a score of winters from the murder of Bobby Rose
When Pony Hays went insane ‘n told the law that he had been the dealer
By the window he grips the bars, sees his arms grow thin ‘n old
The men in white have saved his life but his soul has fled out to the stars
And ol’ Durard don’t say nothing, keeps staring with those gray eyes
He’s a bear-like man, got giant hands, never smiles when he sees ya coming